Please sign: https://www.change.org/p/“President Donald Trump: Stop the Persecution of Serbian Christians in Kosovo and Metohija”. There are over 1 million of you Serbs in the USA, you can make a difference!

Stop the Persecution of Serbian Christians in Kosovo and Metohija 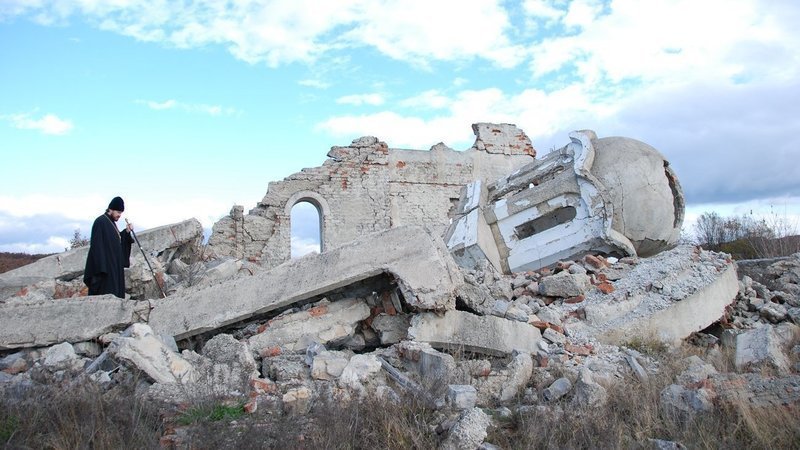 The Kosovo Project started this petition to “President Donald Trump: Stop the Persecution of Serbian Christians in Kosovo and Metohija”. and 1 other

***We are not seeking donations at this time***

To the United States President Donald Trump and Members of Congress,

We, members of the Serbian American community and their friends, are writing to ask President Trump and the United States Congress to stop supporting Albanian leadership, as led by Hashim Thaci, and the creation of a military under their control in the Serbian Province of Kosovo and Metohija.

Hashim Thaci’s regime has cleansed two-thirds of the prewar Serbian population from their homes in the Serbian Province of Kosovo and Metohija. The 40,000 Serbs of Pristina have been almost entirely purged from the city in a savage Albanian pogrom. Hundreds of Serbian Christians have, and continue to be murdered. Buses carrying Serbs are stoned while Serbian mourners are attacked in cemeteries. Recently heavily armed Albanian militias raided stores for food and other products with Serbian labels; the confiscated Serbian goods were burned in public bonfires. An 100% tariff has been imposed on Serbia while the tariff on Albania has been lowered to zero. All of this is an effort on the part of Hashim Thaci’s regime to eradicate Serbian Christians and other indigenous ethnic minorities in Kosovo, including Jews and Romas, out of existence.

Hashim Thachi has been identified by The Council of Europe as the head of a “mafia-like” Albanian criminal cartel engaged in trafficking heroin, weapons, and human organs. According to Carla Del Ponte, former prosecutor for the International Criminal Tribunal for the former Yugoslavia, Hashim Thachi is also responsible for the harvesting of the organs of 300 Christian Serbs and other non-Albanian minorities in death “detention centers” in Albania.

Albanian leaders in Pristina openly declare their allegiance to neighboring Albania and have effectively removed the border between Serbia and Albania. Albanian leaders have declared their intent to create an ethnically pure greater Albania. Albanians in Kosovo have one of the highest ISIS participation rates in the Balkans. Numerous terror plots in Europe and against the United States are perpetrated by Albanians in Kosovo.

Over 150 Serbian Orthodox churches, monasteries, and cultural and religious sites have been vandalized, set ablaze, and destroyed. This goes against broader United States policy and recent acts of Congress protecting Christian minorities from persecution. Recently, President Trump signed into law H.R. 390, the “Iraq and Syria Genocide Relief and Accountability Act,” authorizing assistance to Christians persecuted in Iraq and Syria. The Serbian Christians in Kosovo should be entitled to the same protections and relief.

We respectfully ask President Trump and the United States Congress to take the following steps:

·         Issue a resolution condemning the persecution of Serbian Christians, Jews, Roma and other minorities by Hashim Thaci’s brutal regime

·         Offer support and relief to persecuted minorities in the region

·         Urge President Trump to remove all U.S. State Department holdover diplomats in Kosovo and replace them with appointees from President Trump’s administration

The Serbian people have been longtime allies of the United States. Serbs fought alongside the United States in both World Wars. Serbia lost 25 percent of its population during WWI. In WWII, Serbia fought as part of the Allied forces while hundreds of thousands of Serbs were rounded up by Nazis and murdered in concentration camps. At the same time,  Serbs executed the largest rescue mission of American Airman in history, Operation Halyard, which resulted in the air lifting of 432 U.S. and 80 Allied personnel from behind enemy lines.

This is not the first time Serbs have suffered at the hand of Muslim-extremist occupiers. The Ottoman Turkish Empire subjected Serbian Christians in the Balkans to torture, taxation, slavery, and murder for five centuries. This includes Christians in Kosovo and Metohija. As Bishop Nikolaj Velimirovic explained to a congregation at Saint Paul’s Cathedral on June 28, 1916:

„We made the Turkish sabres blunt with our bones…Not for a decade, nor for a century, but for all those centuries between Rafael and Shearer… In other words, while Europe was becoming Europe we know Today, we were its fence, the impenetrable wall, and the wild thorns around the gentle rose. On Vidovdan, year 1389, Serbian tsar Lazar came to Kosovo with his brave army, on the frontier of the Christian Europe, and in order to defend the Christian culture, he gave his life. At that time there were as many Serbs as Englishmen now. Today, there are ten times less Serbs than then.“

The Serbian people are facing a similar persecution today.

The European Union and NATO have opposed the creation of an Albanian army in the Serbian Province of Kosovo and Metohija.

If the United States continues with the catastrophic and failed policies of former administrations the stability of the Balkans will be compromised, and Europe will be at risk of war.  Please act to stop this injustice before it is too late.