Croatian “Ustasha” knife used for the slaughter of Serbian children

From 219 Serbian villages around mountain Kozara during WWII had been slaughtered around 11,000 children. The average age of the murdered girls and boys was just 6.5 years.

Ustasha (Croatian Nazi troops from WWII) knife specially designed for the mass slaughter of Serbian children in WWII leaves a very strong and painful impression on every person visiting the presentation named “The anatomy of forgetting”, displayed at ” People’s university library” (PUL) in Banjaluka, Republic of Srpska.

“Only when you take the knife in your hands and ask yourself: What is this? and How it works?, only then you would understand all the horror of the events, this presentation tells us about.”, for the news agency “Srna” explained one of the authors of this presentation, Mrs Vanja Smulja.

This knife was discovered at location Patrija, beneath Kozara mountain, where, not only during the Nazi offensive in the summer of 1942, but rather during the course of the entire World war two, the horrific atrocities were executed over helpless Serbian civilians.

According to Mrs Smulja, among the uniquely designed weapons used by Croatian Ustasha soldiers, the knives took special place, because this way the mass slaughter of the victims was “silent”.

“The most famous specially designed knife, used by Croatian “Ustasha” executioners, in various Concentration camps within the Independent State of Croatia (ISC), was named `Srbosjek (Serb-slicer)`- the knife mounted on the specially designed leather sleeve, that actually was manufactured as the German Nazi design in the factory ‘Grafrath gerb. Solingen’ “ (Independent state of Croatia during WWII was a loyal, and probably the most brutal, ally of Nazi Germany- comment by translator), elaborates further Mrs Smulja. 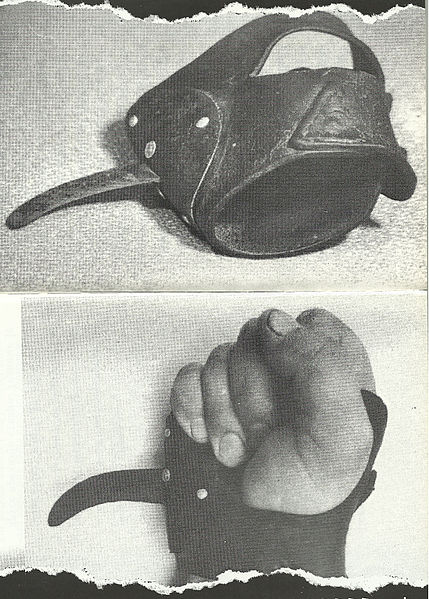 She underlines that this historical item presents the hard evidence of the existence (in WWII) of the organized and systematic effort, to produce the “weapons for the mass atrocities”, which would make “the job” much easier and more efficient, for the special Croatian Ustasha units.

“It was the system which exterminated, in monstrous ways, innocent people who were guilty only because of their Serbian, Roma or Jewish ethnic identity.

It was the system which was sentencing to death the children, marked in advance as a potential `enemies of Croatian state`, not allowing them just to grow up, not to mention- to allow them to become a real threat for the security of their Nazi state”, underlines Mrs Smulja.

“Additionally, this presentation is very important- as the symbol of the Serbian WWII exodus, as the part of a history, and as the very compelling evidence that materializes the Evil itself.

This artifact is very `alive`, three-dimensional part of the presentation’ collection, and it takes the central place of this display.  Its importance for this presentation is unique, because it materializes all atrocities depicted in the existing historical photographs and documents.”, added Mrs Smulja.

This knife (designed for slaughtering children), the property of the Museum in Mrakovica and the part of their regular display, creates among the people visiting the presentation very emotional responses, which are impossible to describe using words.

“A normal person simply cannot understand, neither accept, that something like a specially designed knife for slaughtering children, even existed”, says Mrs Smulja.

She is certain that this artifact enables visitors of this presentation to have a unique prospective about the events that unfolded during WWII in the Balkans.

According to the “Association of the children survivors of Holocaust- Jastrebarsko 1942”, from 219 villages and towns beneath mountain Kozara, there were murdered, or died in captivity from a hunger and diseases- around 11,000 Serbian children.

The youngest were the newborn babies in a diapers and crates- the oldest 14 years of age.

The diseases  and hunger, inflicted by Croatian captors, were primary death cause among the newborn Serbian babies. 1,195 of murdered children were the newborn babies, up to just couple months of age. The average age of 11,194 murder victims (boys and girls) was 6.5 years.

Mrs Smulja says that idea to prepare this display came from the Academic Srboljub Zivanovic, who presented (in his will)  own library as a gift to PUL, Republic of Srpska.

During conversation about his legacy, they came up with the idea that PUL should prepare this display, as a part of the coming “Sixth international conference about Jasenovac concentration camp”.

Authors of this presentation are the librarians from PUL, in Banja Luka, Republic of Srpska: Vanja Smulja, Spomenka Kuzmanovic and Ljubica Milekic. The display will be open for public until May 18th 2016.

Link for this article in Serbian language> http://wp.me/p1Fuk8-MyH